If you’ve seen it on the menu and asked yourself “what is a cortado”, this is for you!

Since diving into the local coffee scene, I’ve learned there is more to the world of coffee than just espresso. There are drinks like a macchiato, which by the way is REALLY very different than the Starbucks version. Drinks like the flat white and cortado are gaining popularity as consumers are learning there is much more to coffee than mochas and lattés. One of my co-workers moved from Seattle and his favorite drink is a cortado. What is THAT?! I had never heard of such a thing. Well, I soon found out this is one of my favorite ways to drink an espresso shot.

Also, if you haven’t grabbed your FREE copy of the Coffee Roast & Brew Guide, make sure you get it. It has all of the secrets to brewing great coffee at home, with a bonus of showing you how to pair your coffee with different foods so you can enjoy coffee anytime and not just in the morning. Plus you’ll get on my monthly newsletter where I share new coffee spots, exclusive recipes, and other tips to make great coffee right at home!

What is a cortado?

Also knows as a gibraltar, a cortado is rooted in the Spanish verb “cortar” which translates to “to cut” in English. It was named this by the Spanish because milk is used to ‘cut’ the acidity from the espresso shot. The French have their version, noisette and the Cubans have their version, a cordito, cut with sweetened condensed milk. All versions are the same, just the milk may be a bit different. A cortado is a double shot of espresso (2 oz) with between 1-2 oz of steamed milk served in a gibralter glass, hence the name. If you get a really good barista, they will craft a pretty little design on top of your cortado!

At Bad Owl where I find has the BEST cortados, they serve it with a glass of sparkling water. The sparkling water helps to cleanse the palate before and after enjoying the cortado. Ever had a taste of coffee after your freshly brushed teeth? Bleh. Gross. Have a sip of sparkling water after you drink coffee and bye bye coffee breath!

How is it different? 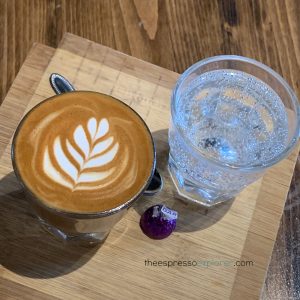 A cortado is in the line of espresso drinks that contain milk. You’ve heard of a cappuccino, right? A shot of espresso topped with steamed milk served in a cute little cup that you can only fit your index finger around, yeah that’s the cappuccino. It’s basically the same as a cortado, but the milk isn’t as hot. A flat white is pretty much the same as a cortado, except the milk has more of a velvety texture due to how it is steamed. “Flat” meaning no air allowed to create bubbles or foam in the milk. A macchiato has the least amount of milk than any of the rest; only about a half ounce is used with the espresso. Contrary to the popular ‘macchiato’ at Starbucks, it’s not milk heavy. Then finally there’s the latté which has the most milk of all of the drinks, 6-20 ounces of milk.

Why it’s going to be your favorite

I rarely drink shots of espresso, however after having a cortado, I’m all in. It has the perfect balance of creamy texture from the espresso shot and the right amount of sweetness from the touch of milk. It’s not bitter and doesn’t need any sugar added to it. Plus, it’s the right amount of coffee to sip while visiting with friends! Next time you visit your local coffee shop (and it’s not Starbucks *wink wink*) ask for a cortado and try it out. If you’re on Instagram, tag me in your picture of it #theespressoexplorer!

« Why is My Coffee Sour?
Dark Moon Coffee Roasters »